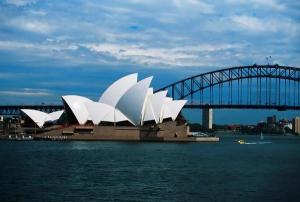 It is raining cats and dingos down here. I have never seen anything like it. We live in the suburb of Roseville, which is just North of Sydney over (or under) the Harbor Bridge. It is near Chatswood/Willoughby…in case you can’t find it on a map. It is a beautiful neighborhood with incredible gumtrees and palm trees all about. It is very green with a tropical feel and the weather to prove it. It is generally hot as sin or raining hard enough to inspire ark building. No happy medium. It is an amazing place to visit! But, I must be honest that life without my dear ones near by has been tough to adapt to. In the words of Chicago, you (all are) a hard habit to break. (Just a note: I think I will incorporate as many Chicago lines as possible into this blog, just for giggles…enjoy). Some bulleted observations.

Quick poll: When, if ever, should I introduce them to my rapping skills?  How will I know when they are ready?

Phrase of the Day: “Stone the flaming crow!” Translation: You’re kidding me!

Word of the day: Icebox

Love to you all. You bring meaning to my life. You’re the inspiration…