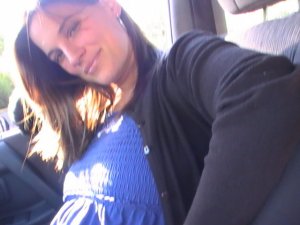 It was my last painting class and I was running behind schedule.  We were supposed to be doing an all white painting, using color to suggest change in tone. I was excited. It sounded fun.  Instead I walked into the art room 40 minutes late only to find myself face to face with a naked man standing on a pedestal in the center of the room, legs akimbo, wearing only a beaded rainbow bracelet.  This was not the all white painting I had in mind.

I tried to set up my work-space without disrupting the nude dude or the students who were attempting to capture his likeness.  I quietly found a spot near the exit, but kept nervously dropping my supplies.  Picking up my fallen items was no picnic either as third trimester bending is like doing yoga in stilettos.  It’s a challenge.  Not only was the situation awkward for me but, the rest of the room seemed to be uncomfortable on my behalf.  They kept giving me sympathetic glances, but seemed afraid to leave the comfort of their dirty drawings for fear someone would see what they had done.

I also made the mistake of texting Mike about what was occurring. He then proceeded to send me endless text messages full of phallic wordplay.

Then came the painting.  I could not seem to make sense of his form.  All of my attempts were futile verging on humorous. He was in his sixties, with a curious gaunt,almost feminine  build punctuated by a modest pot-belly and sparse muscle tone.  I could not seem to make him look masculine on canvas and I did not have the balls to paint his manhood. So in the end, I painted something that looked more like a misshapen eunuch.  He didn’t seem impressed.  ﻿

I have some other things going on right now that are blog worthy like being 9 months pregnant.  I just haven’t felt inspired to write too much about it. After all, the prenatal blog market is saturated.

There are the super-mom bloggers who start nesting in week six.  They are the household CEO’s;  familiar with cutting edge infant technology, up on where to find the latest and greatest in nursery décor, and generally knowledgeable about all things fetal.

There are the neophyte bloggers, irritated by the horror stories they have been inundated with. Little do they know that before long, they too shall mercilessly terrorize soon-to-be parents with their own tales of insidious contractions, tearing flesh, bleeding nipples and sleepless nights.

There are the granola bloggers, who intend to rid the world of all things synthetic.  They are well educated in the ways of the ancients and ready to apply pressure , perhaps even employ sanctions on those who do not utilize their local diaper service.

There are the maternal bloggers who believe in frequent anatomical updates. They are not afraid to use words like “vulva”, “discharge” and “hemorrhoids”. All words I hate!

I do not fit into any of these categories.  I am a cheap skate, sub standard consumer who uses whatever is on hand to tend to infant need even if it is made in China. I also prefer to use euphemisms to describe the human body and it’s functions.

I have spent most of this pregnancy, as a happy mother of two and a reluctant mother of three.  When asked if I am excited about being pregnant, I have answered with self absorbed diatribes about how much this is gonna suck.  Or in the words of Louis CK, how a human is about to burrow out of my body and step on my dreams.  No one wants to hear someone complain about a blessing or whine about a gift. I know that. So, early on I decided not to write about being pregnant, so as not reveal my cynical and downright inappropriate response to the turn of events in my life.

The truth is, I am just scared. I am scared of a mid life crisis hitting me mid diaper change.  I am afraid of returning to the classroom after a ten-year hiatus and using nomenclature that is dated.  I am afraid of loving another person as much as I love my girls–of worrying about another human being to the degree that I worry about them.  I fear not having enough hands to reach them if there is danger, or a big enough lap for them all to fit on…or too big of a lap because I am in my thirties now and let’s be realistic, I’m more Oprah than Gayle.

And then there is labor.  In an effort to prepare myself for what lies ahead, I watched a youtube clip the other day called, The Miracle of Life – A Vaginal Birth.  It was a bad idea.

But, today something happened.  I pictured her. I saw her clearly in my arms and I saw the look on my face when our eyes met.  I was not scared.  I was not reluctant or regretful, and I heard myself say, “Momma’s here.”  “Momma loves you.”.   And I meant it.

Got a name: We think so.

Any action: Lots of contractions lately but nothing consistent.

Will she be an Australian Citizen: No.  One of us would need to be Australian or a

Permanent Resident to make that happen.  This will be her home away from home though.

Do you like your Midwife?  I have a male OBGYN.  He is great, but I am still a little nervous about being “examined” so thoroughly by a male physician. He is a smallish man with puffy gray hair, three daughters and a broad “strine” accent. He is kind, humorous, warm and comes highly recommended.  He does have an unusual habit worth noting though. He begins each sentence very abruptly, then trails off leaving the listener unsure of what just happened.  As a result, I usually only understand about 25% of what is said.  Hopefully this will not impede his ability to instruct me when it counts…”So, Heather, go ahead and puiusidjkfjdklajdfjld…..”

What have you enjoyed about pregnancy:  Mostly how uncomfortable I make smokers feel.  They hide their heads in shame when I pass.  Sometimes I throw in a delicate cough on top of my waddle to twist the knife. I also enjoy the special treatment I receive in public places. The varicose vein that has decided to add texture and color to my right thigh is nice too. I always wanted one of those.

2 thoughts on “T minus 3 Days and Counting”